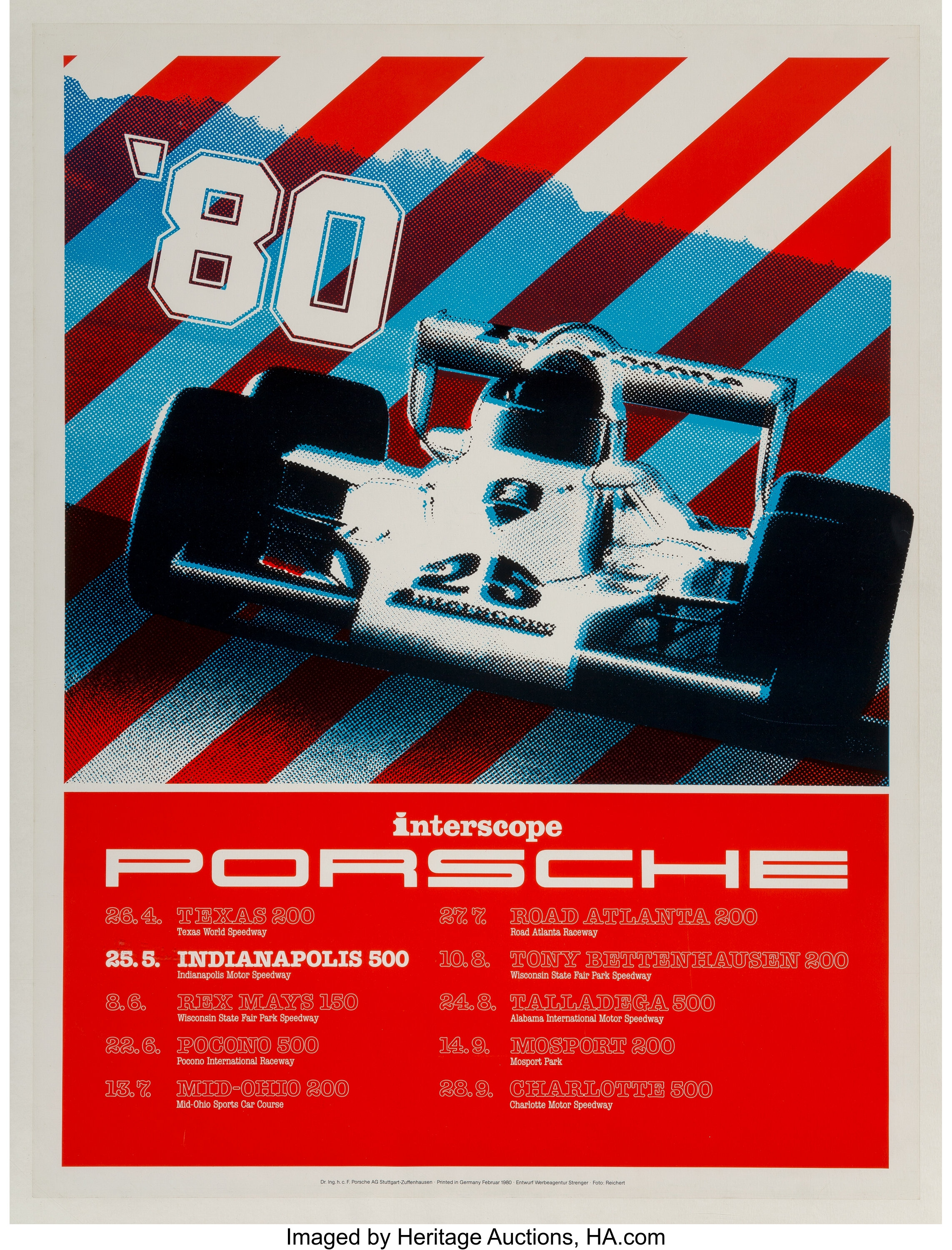 A Porsche poster depicting the important appointments for the brand in which he will participate in the following year. The visual have the classical approach of Erick Strenger with his Psychedelic color. 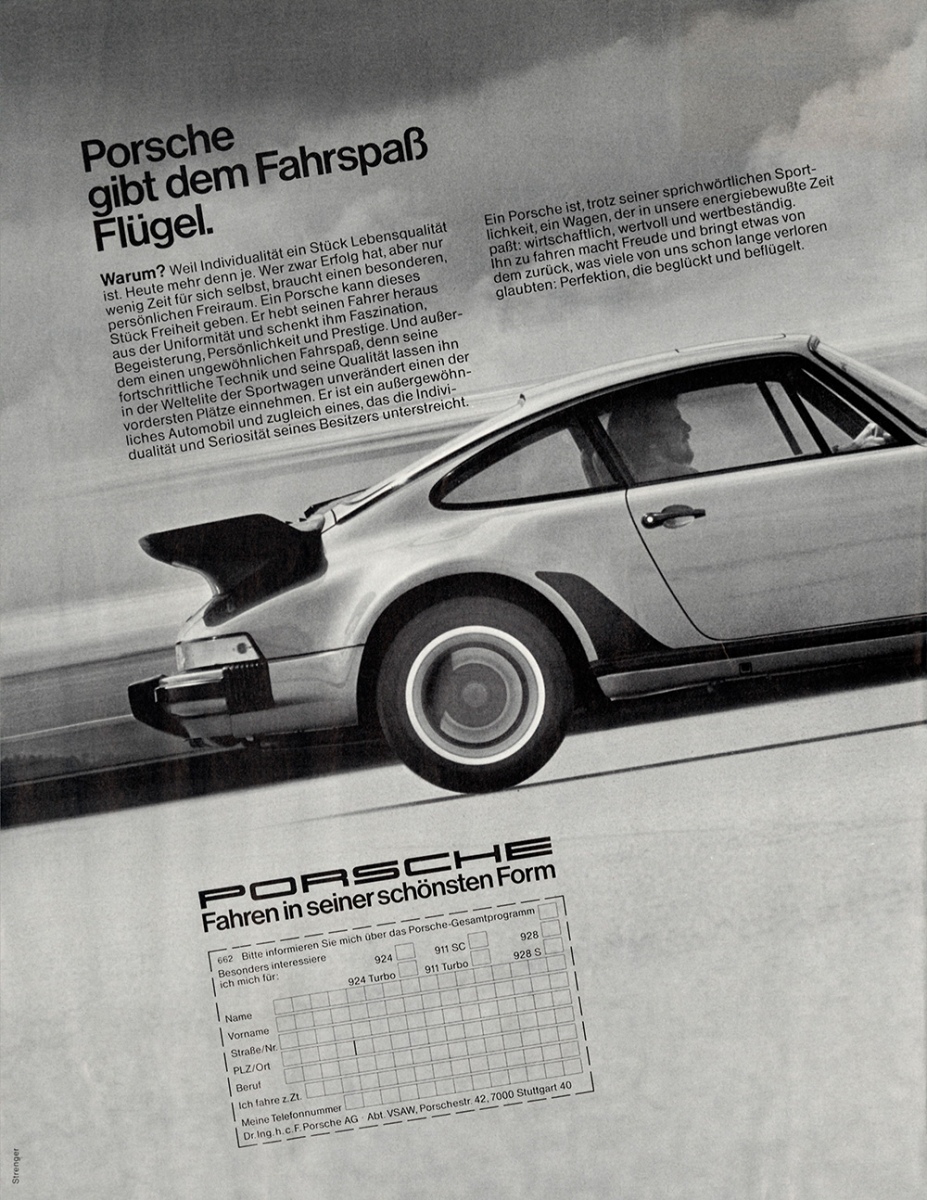 With Porsche, driving is a truly unforgettable experience, a driving pleasure, as the campaign headline indicates. The body copy tells in detail that your Porsche is a car that makes you rediscover your personal space by giving charm to your figure.

Again used the panning effect to create dynamism within the scene.
‍

This ingenious campaign sets and sets Porsche's tone of voice. The campaign communicates two qualities of the car using a single message: Thanks to the assistance and warranty on Porsche used cars, you can drive endless kilometers and your warranty will never expire, given the high quality of the car components.

Monochromatic is the answer when Porsche want to give an impact message on the headline. 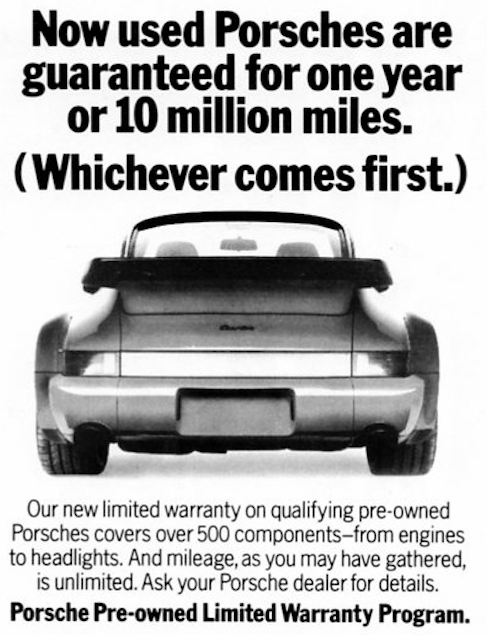 In this case we are dealing with a campaign that wanted to use only the copy part, showing a ranking of the top 10 places of which 9 are occupied by Porsche, reconnecting to the ironic headline that mentions "nobody's perfect".

We can see that although there is no reference to Porsche, this visual is still attributable to his world. 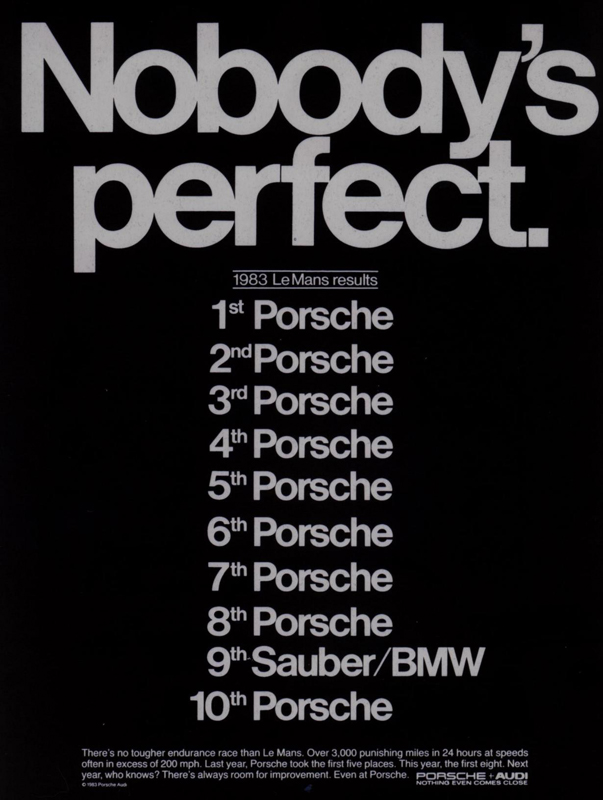 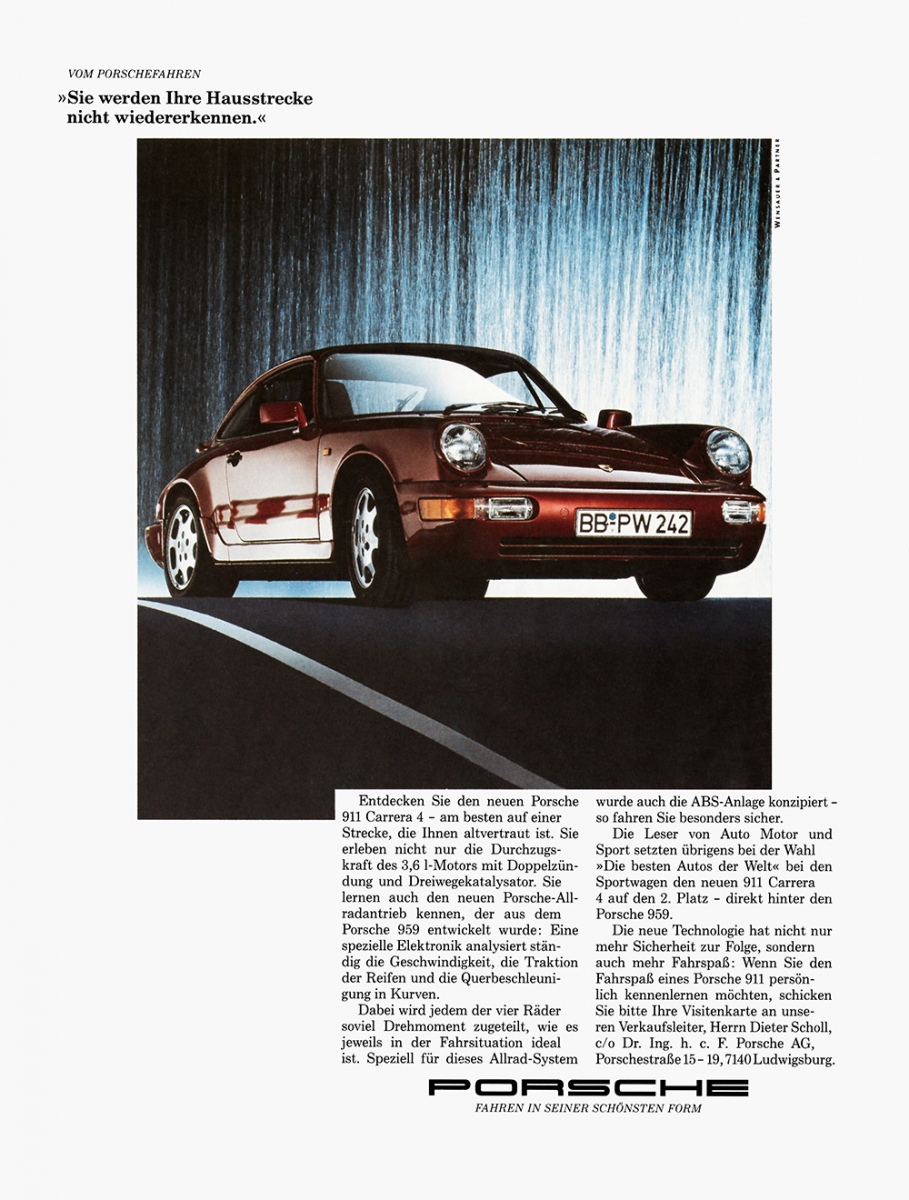 This press campaign promotes the new 959 model which features an excellent ABS system and new innovative capabilities that allow you to push the car's performance to the max even on unfamiliar roads. The visual start using the modern approach with a lot of white space around the image and the bodycopy.

Large images and lots of contrast represent Porsche's publicity for the future. 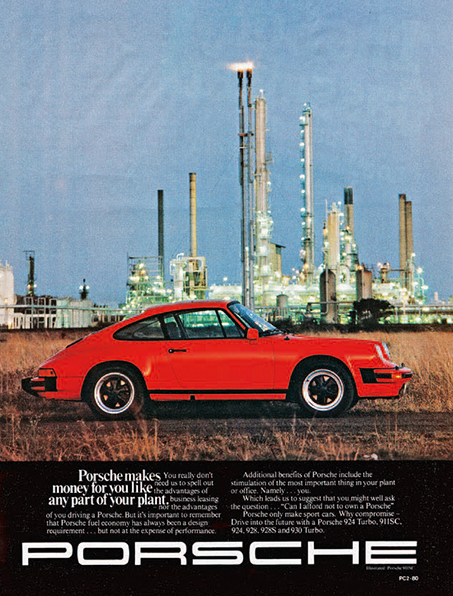 The print ad advertises the business leasing offered by Porsche to its customers. The copy wants to make it clear that buying a Porsche increases one's turnover. Porsche makes money for you like any part of your plant.

The silhouette of this orange Porsche 964 is once again the center of attention.

The porsche 911 has always been Porsche's signature model par excellence, but also everyone's dream. This print ad implies it with an ironic key. All car enthusiasts from an early age have dreamed of driving a fast, sporty yet elegant car at least once, and these words are not usually associated with a Nissan or a Mitsubishi. In short, who wouldn't want to drive a Porsche at least once in their life? 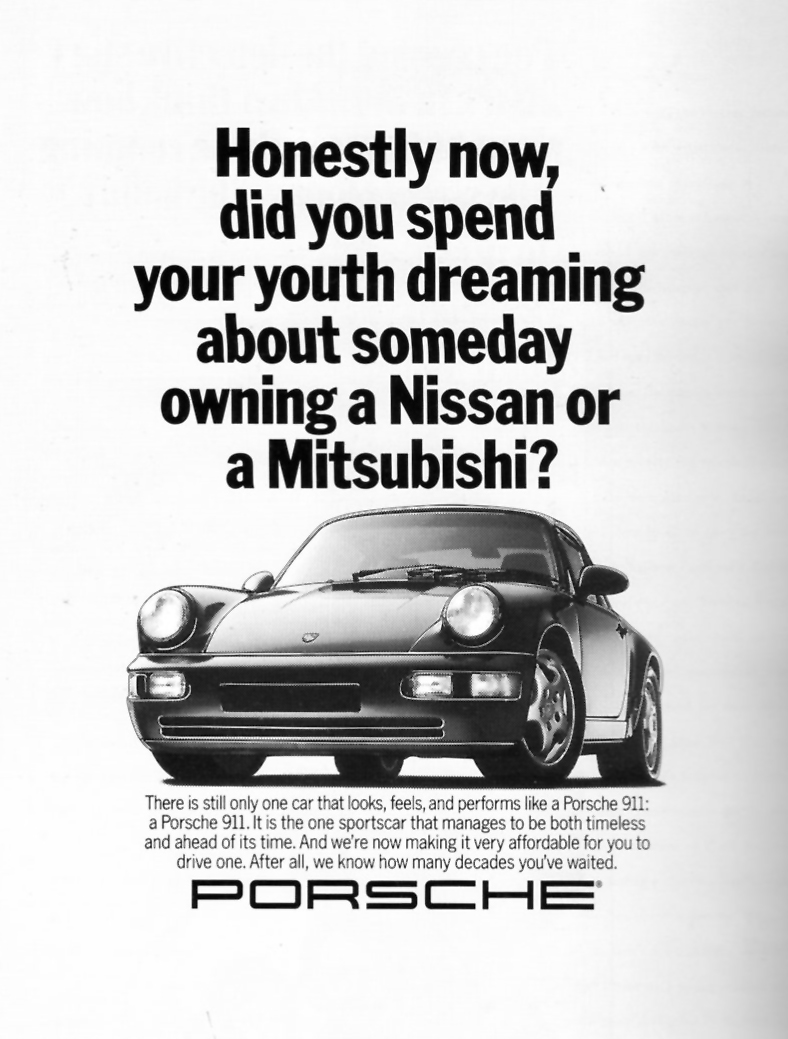 For this campaign the simple and direct message: if you need to compensate for something, buy a Porsche. The campaign ironically conveys the "greatness" of the car given by the potential and performance that the vehicle in question possesses. The body copy present summarizes and specifies the message, already direct, of the headline.

Always black and white to gave a strong impact to the headline of the advertising. 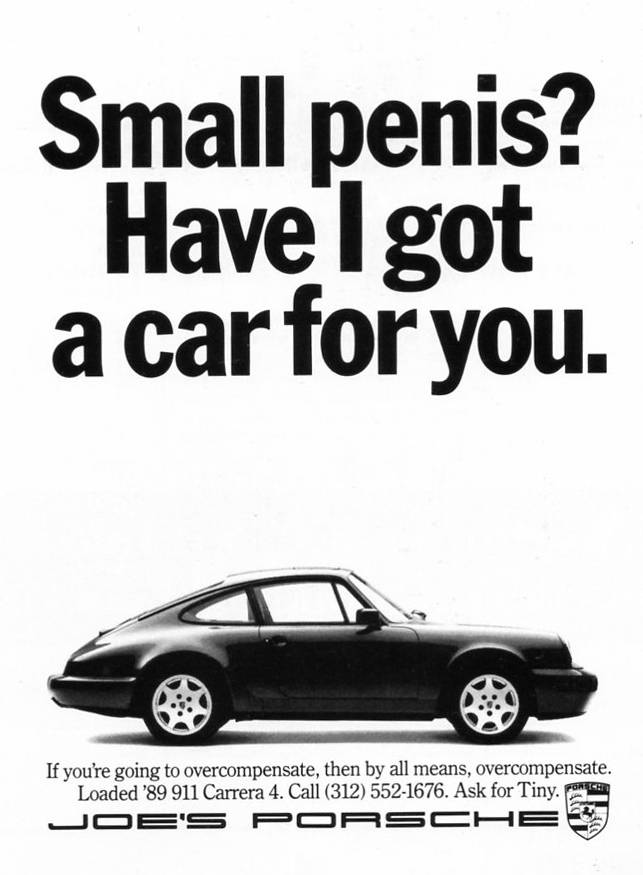