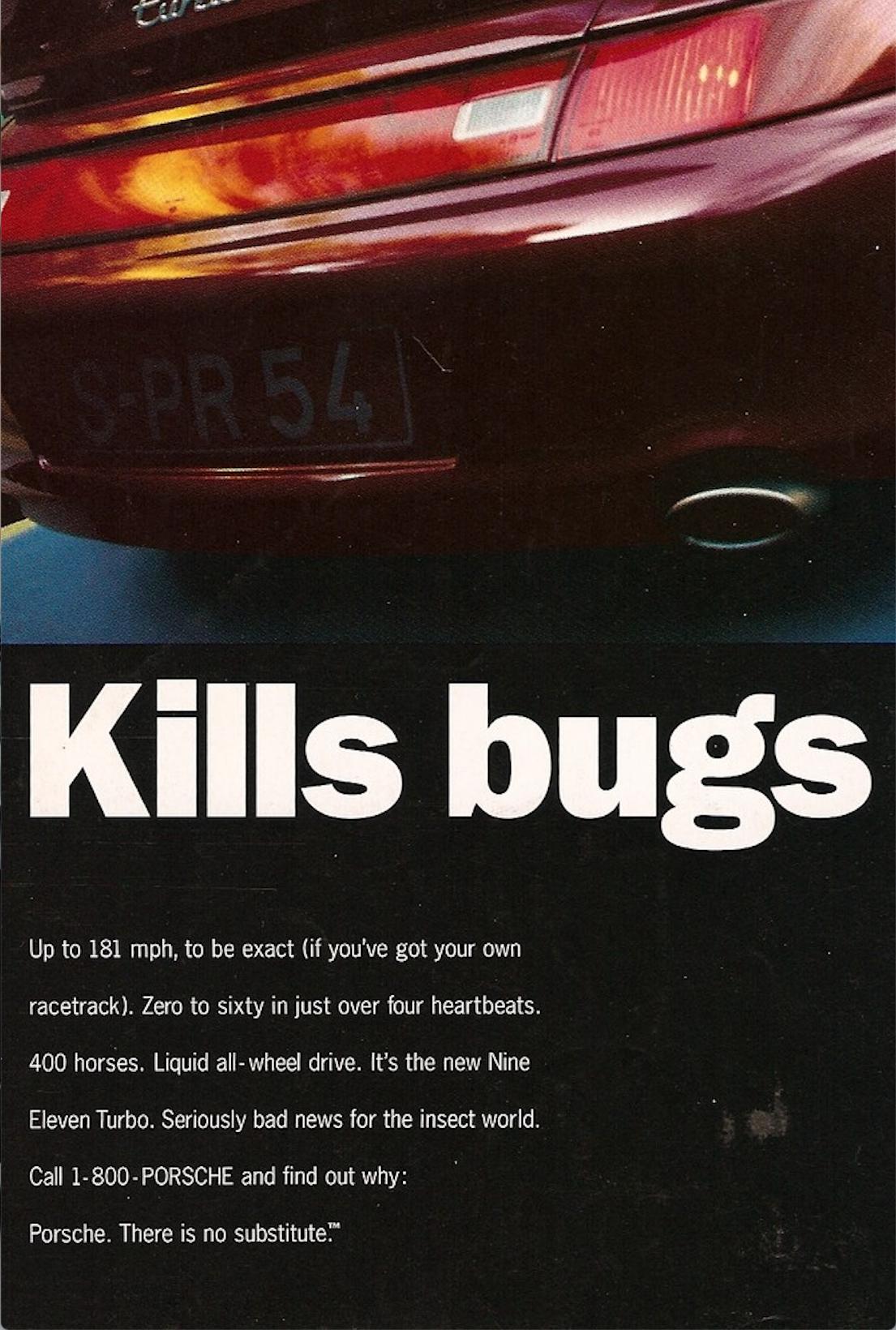 At least once at the end of a trip everyone has had all the insects squashed on the hood due to the speed. This print expresses this concept by sponsoring the new Porsche with unprecedented acceleration and engine power. This is bad news for all insects.

Porsche's ironic tone never ceases to surprise, like this press campaign promoting the new two-seater Boxster model, perfect for relaxing weekends for couples. In fact, the more children you have, the more you need them.

The advent of Porsche's new visual communication style can be seen with this advertisement.
White background, photography and text are the only elements that characterize the new visuals, apart from some exceptions. 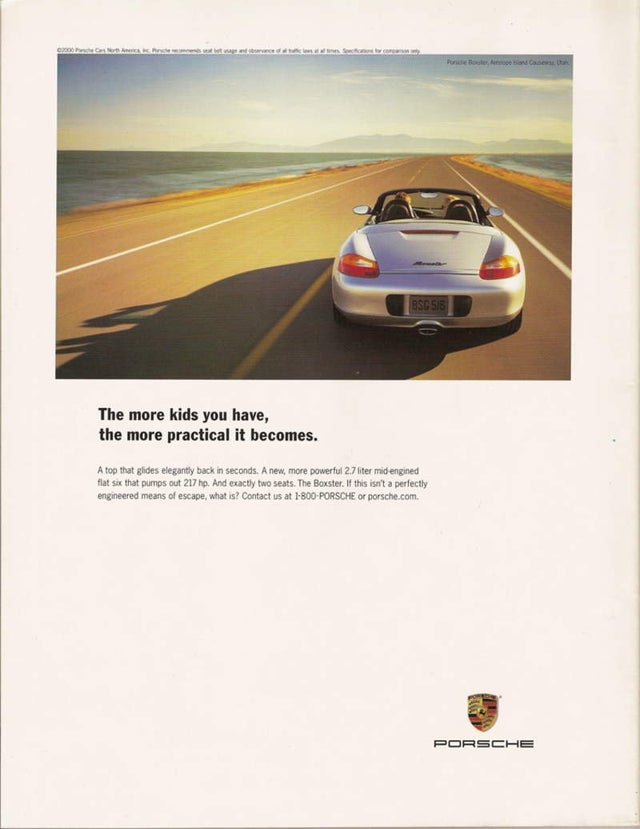 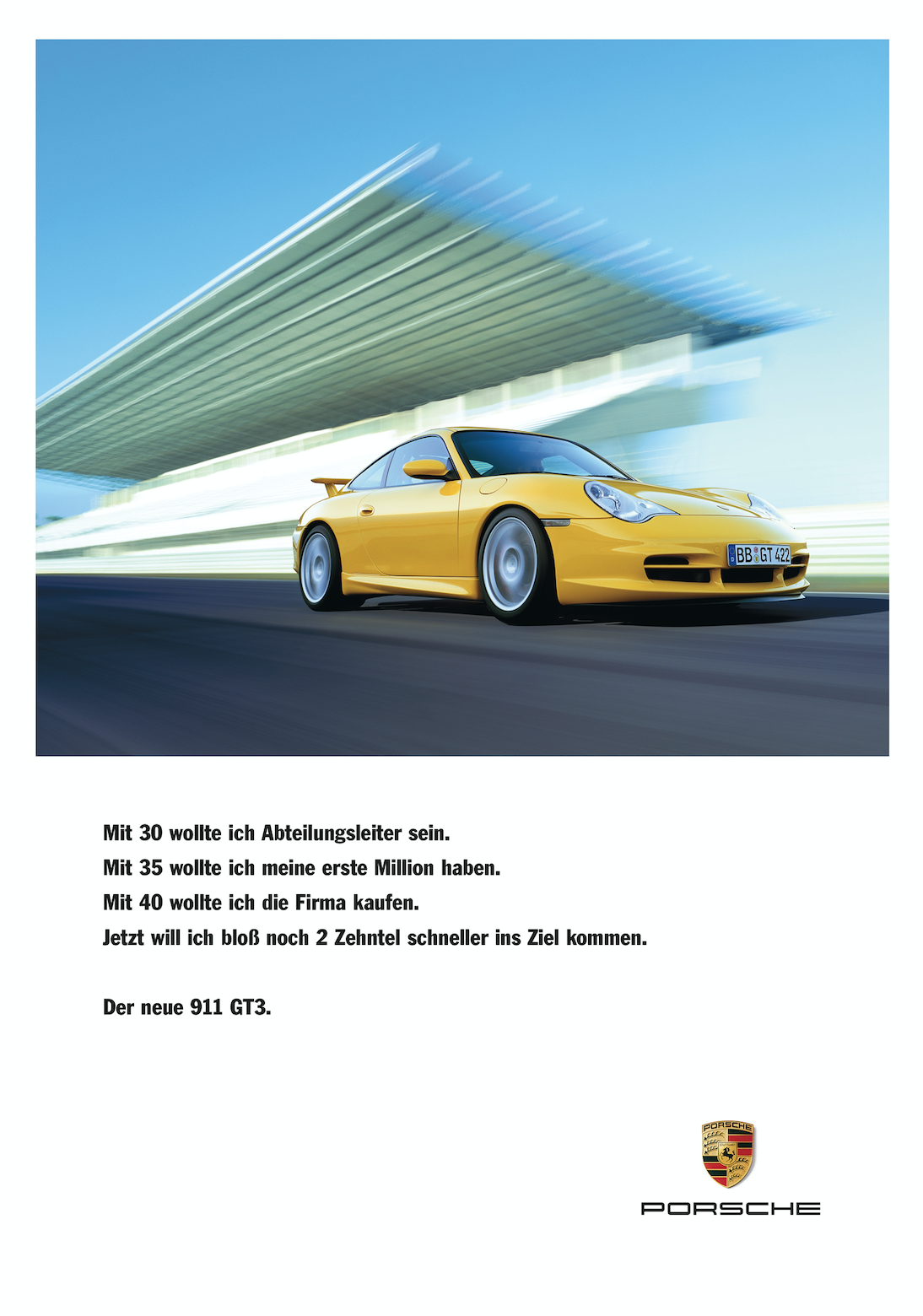 The campaign sponsors the new Porsche 911 GT3 with a short story that aims to highlight the improved performance of the car. Classic approach of this visual with a photo of the yellow car with a panning effect that create movement.

The yellow color of this Porsche GT3 will make it an icon for lovers of fast and sports cars.
Here, too, we can find the panning effect that creates greater dynamism in photography.

A press campaign that introduces the Porsche Cayenne, an all-wheel drive car that will allow you to stay glued to the asphalt. Because as the campaign mentions, the 4 corners are important.

The Porsche Cayenne is the model that allowed the brand to recover after a great economic downturn in previous years. It greatly expanded the market and production budgets soared. 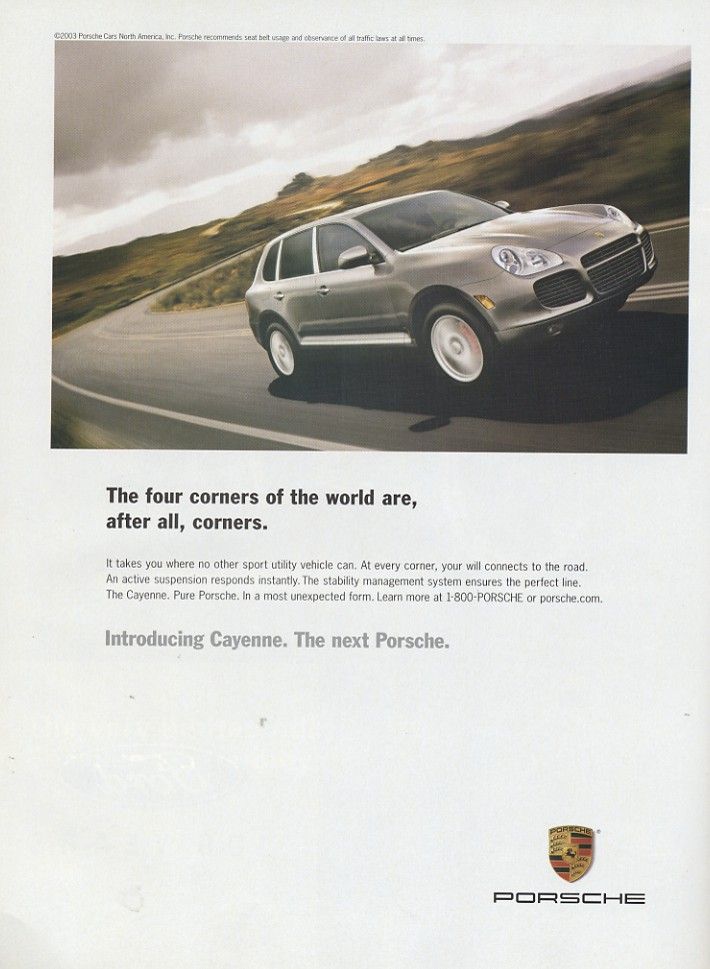 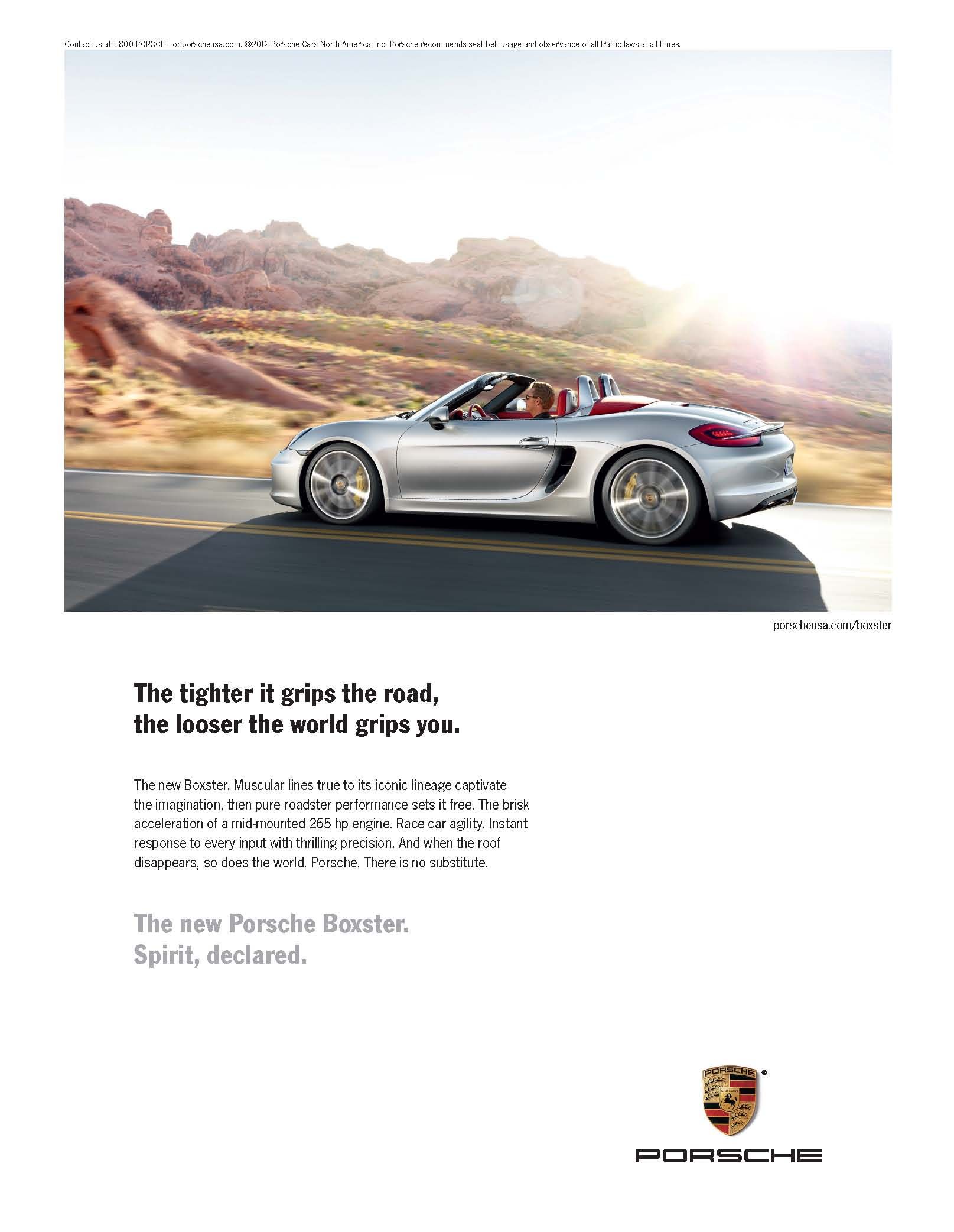 This print ad speaks of Porsche's Boxster model which has great performance on the road and super speed. "The tighter it grips the road, the looser the world grips you.

As you can also see in this advertisement Porsche wants to focus attention on the interior of the vehicle with these bright red interiors and gray exteriors. 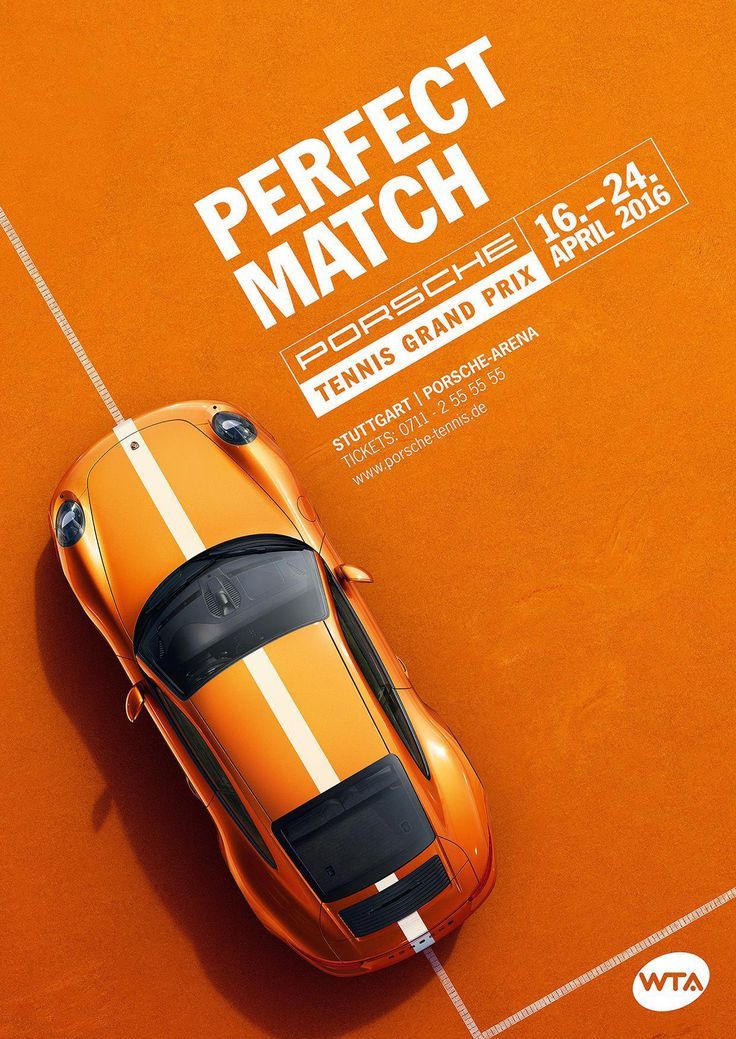 Print Ad sponsoring the Tennis Grand Prix in the Porsche Arena. We can see the German car with the racing stripe that blends perfectly with the pitch. The Orange is subject of this visual.

With this visual, Porsche wants to resume in an abstract and more minimal way the style used in past decades in which visual and photography were one thing.

The porsche carrera 911 has always been the symbol of the brand, but despite the passing of time and the car evolving into ever more technological and performing qualities, it has always remained the same.

The advertising is structured so that if you hypothetically turn the visual you could admire the old Porsche model and the new model respectively with the same original lines. 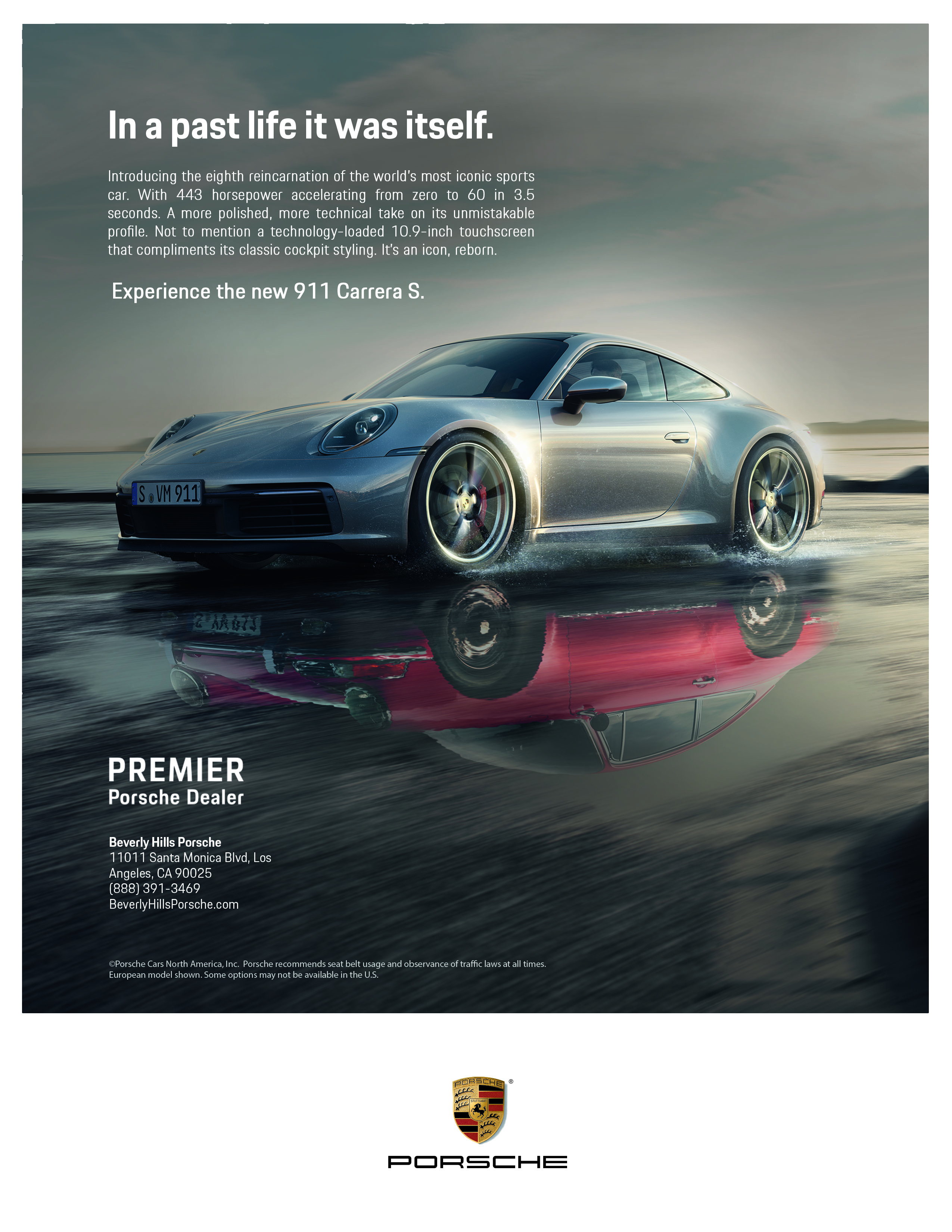